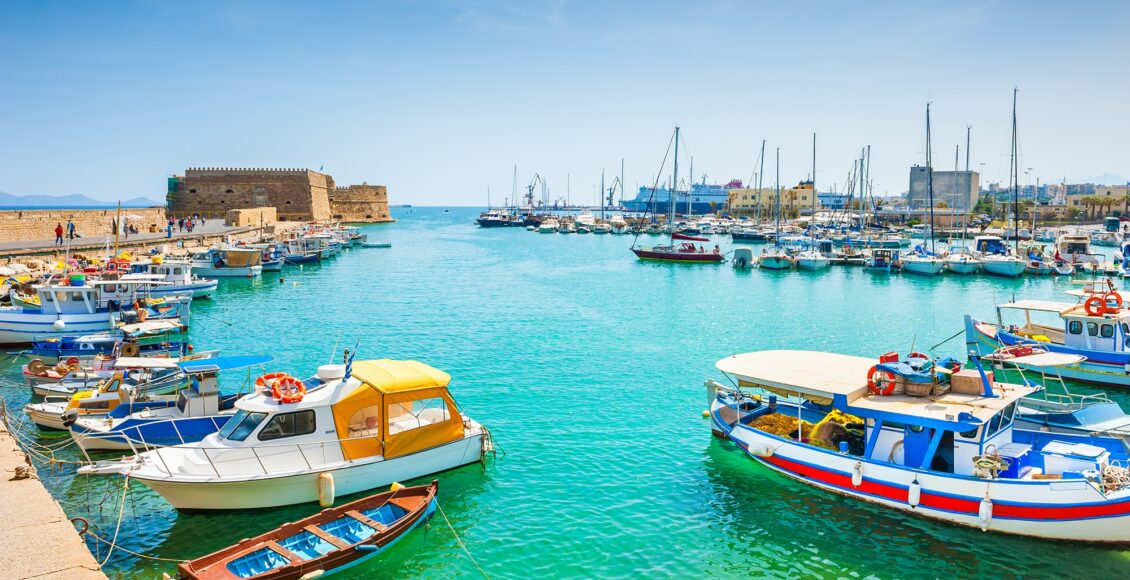 Although Foreign Office guidelines currently advise against sea-going cruises (and quarantine restrictions are in place on return to the UK), keep Crete in mind when deciding on your next voyage

Heraklion is Greece’s fourth-largest city, the capital of the island of Crete, and at first glance appears a busy modern metropolis. Look closer, however, and you’ll find a place that retains much character and many historical treasures, as well as providing access for cruise passengers and other visitors to the ruins of the Minoan palace at Knossos, one of the Mediterranean’s greatest archeological sites.

Cruise ships dock at several points around Heraklion’s large modern port. Shuttles run from more distant piers to the main terminal. Turn right (west) along the waterfront from here and it is an easy third of a mile (500m) walk to the 14th-century Venetian walls that mark the limits of the medieval city.

Can I walk to any places of interest?

It is a straightforward walk to the old city (see above), though street signage is often poor and rarely in English. Once you are within the Venetian walls everything you want to see – notably the main archeological museum, the Agios Titos church and other museums – are all within a few minutes’ walk. The Knossos site, however, lies three miles (5km) south of the city and requires a taxi or bus.

It is easy to reach Knossos by public bus. Heraklion has several bus terminals: the one with buses to Knossos, Terminal A is located on the waterfront road en route for the old city, just a few minutes’ walk west from the cruise terminal. Look for the blue (city bus) #2: services leave roughly every 30 minutes.

Taxis are plentiful but be on the lookout for unscrupulous drivers – ensure meters are on (and set to the day not night rate), and that you are not charged bogus supplements. If possible, book before you arrive with a company such as Heraklion Taxi.

What to see and do

Knossos is the main attraction, and while you can see the ruins in two hours or so, you should allow longer. You can easily access and explore the site under your steam, but do your homework, hire a guide or download an audio guide to get the most from what can be a bewildering site.

Note that most “half-day” tours usually run for five hours and that most tours do not include the €15 (£14) entrance fee in their quoted price.

On a longer stopover, or with time left over, visit the Archeological Museum – a money-saving combined Knossos-museum ticket is available (€16/£14.50) – and explore the rest of the old city.

What can I do in four hours or less?

Knossos was first settled at least 8,000 years ago and the first palace built here around 2000BC. The present ruins date from a palace destroyed by an earthquake in 1380BC, and once housed 12,000 people in 13,000 rooms, with perhaps another 50,000 people living across the rest of the site, which covers 185 acres (75ha). Most of the rooms are reconstructions – but give a vivid impression of how their inhabitants might have lived – and the many frescoes are copies, the originals having been removed to Heraklion’s Archeological Museum for safekeeping.

What can I do in eight hours or less?

See Knossos and then explore the city starting with the Archeological Museum, which contains superlative finds from Knossos and other sites across Crete. Highlights include the Leaping Bull and Blue Bird frescoes, jewellery, vases and the enigmatic Phaistos Disk, a clay disk stamped with as yet undeciphered hieroglyphics.

Close to the museum are the old city’s two busy main squares, Plateia Eleftherias and Plateia Venizelou, and the smaller Plateia Kallergon, home to the fine 17th-century Loggia building, now the Town Hall. Behind the Loggia is the city’s key church, Agios Titos, which dates to at least the 10th century and contains the relics of St Tito, who brought Christianity to Crete.

Also worthwhile are the Historical Museum of Crete, which explores the island through the ages, and the museums of religious art and natural history.

If you still have time, or are passionate about the ancient past, then you may want to visit Phaistos, another Minoan site beautifully situated on Crete’s southern coast. You’ll need to join a tour or take a private taxi tour as the site is 40 miles (63km) and around 70 minutes’ drive away.

Ouzo is one of the drinks of choice elsewhere in Greece, but on Crete a local anise-flavoured alternative, tsikoudia (also known as raki), is often preferred. Snails (choclioli) and cuttlefish with fennel and olives are popular, as are dishes such as tsigariastó (slow-cooked lamb or goat), apáki (marinated pork), marathópita (pizza-like dough often with fennel, spinach or sorrel) and stamnankáthi, a rocket-like green leaf found only on Crete. Other local specialities include honey, cheese and mountain herbal teas.

Heraklion is a good shopping destination, with plenty of ceramics, jewellery, paintings and local food products that transcend the usual cheap souvenirs of many cruise ports. There are several fun markets, notably the main daily Heraklion 1866 market in the southern part of the old city. Visit the sites of local shopping guides for useful tips on what to buy and where.

Heraklion is generally safe, but as ever be watchful in crowded areas such as markets, narrow streets and the busy site entrance at Knossos.

Average temperatures in Crete of 79F (26C) in July and August (and often similar figures in June and September) can make sightseeing hard work. The island is at its verdant best in spring (April and May) and good, mild weather often extends well into October and beyond.

Museums often have restricted winter opening times, typically closing at around 3.30pm between November and April. Knossos and most museums also close all day or half the day on some religious and public holidays.

Please check the latest travel advice from the Foreign and Commonwealth Office before travelling, and be aware that government advice can change suddenly. Always check your operator’s cancellation policy before booking.

It Was Hard For My Parents To Accept I’m A Lesbian –Dewy, Charly Boy’s Daughter