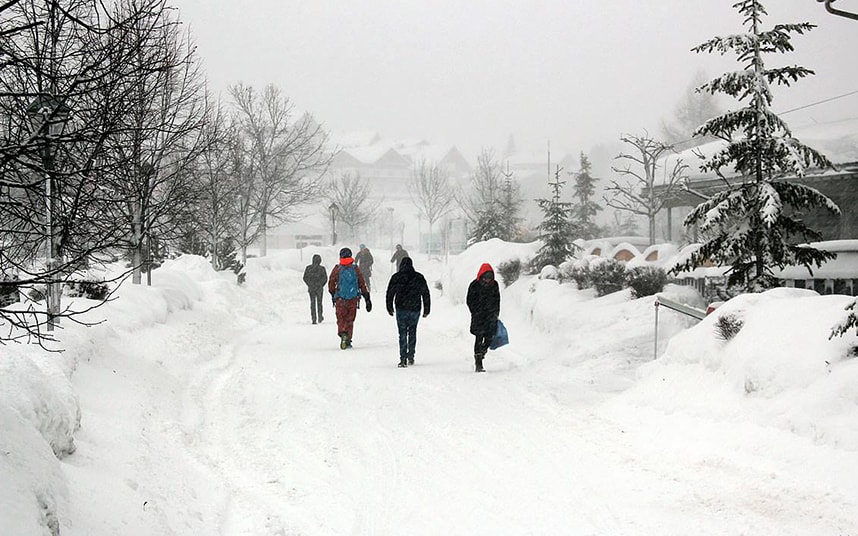 All road and rail access to the popular Austrian ski resort of St Anton has been cut off as extreme weather continues to batter the Alps.

The town popular with British skiers is the latest to suffer transport disruption after 40cm of snow fell over the weekend. The same amount is due to fall again in the next 48 hours.

On Monday morning the avalanche risk across the majority of the Austrian Tirol region, which includes resorts such as St Anton, Lech and Ischgl, was set to five out of five, indicating an extremely high risk.

“This has not happened since the winter of 1999,” Rudi Mair from the Tirol Avalanche Warning Service told the Tiroler Tageszeitung newspaper. This was the year in which the largest avalanche accident in Austrian history, in the resort of Galtür, killed 38 people and triggered an emergency helicopter evacuation.

Other resorts in the Arlberg ski area including Lech have also been affected. Roads in and out of Lech and its neighbour Zürs remain shut this evening, as the resort is expecting a further 72cm of snow in the next seven days.

In a statement on its website, the resort described the current weather as an emergency situation.

“Dear visitors, we are currently in an emergency situation,” the statement reads. “Exceptional circumstances require exceptional measures. The Emergency Committee is doing everything to make sure that all villages (in the holiday region St. Anton am Arlberg) and all people currently residing in the affected areas stay safe. Please keep calm and follow the official and final information you’ll find on this website.”

Updates on the resort’s Facebook page said that, for a limited time today, roads out of the resort were only open for private vehicles to leave until 5:00pm, and no vehicles were allowed to enter.

Across the border in Switzerland, two weeks after 13,000 tourists were stranded due to extreme weather in Zermatt, the resort is once again cut off, with no road or rail access, because of the extremely high avalanche risk. Guests due to arrive in the resort are being advised to seek alternative accommodation in lower-altitude towns and cities such as Basel, Bern, Zurich, Geneva and Lausanne.

According to Austria’s Tirol Avalanche Warning Service website, the avalanche situation in the region is critical: “Over the last 48 hours in western and northern regions of North Tirol, there has been up to 100cm of fresh snow.

“Avalanche danger is high over widespread areas… Both fresh snow and snowdrifts are highly prone to triggering [avalanches]. Increasingly frequent naturally triggered avalanches can be expected during the course of the day.”

Avalanches are triggered when the weight on the snow pack causes the slab to fracture. In his most recent avalanche report, expert Henry Schniewind said, “No matter what the locals say about it being like this all the time in the past, this season’s levels of snow will almost certainly be going down in the all-time records, especially in the higher resorts.

“Val d’Isère, for example, already has about 5.5 metres of accumulated snow at 1,850 m, which is reaching averages of snowfall for an entire season – and we’re only in mid-January.”

What are your rights if your ski holiday is disrupted by heavy snow?

Check that there is a ‘loss of use’ clause in your winter-sports insurance documents. This covers days when you cannot use your lift pass due to bad weather, illness or injury. Usually this comes in the form of a monetary amount per day lost.

If you can’t ski or snowboard due to lack of snow, too much snow, high wind or risk of avalanche you should be able to claim on insurance, but check your policy wording. You may find that a high percentage or all the ski lifts and ski schools have to be closed before the insurance pays out. Tour operators and lift companies may also transfer you to an alternative resort.

Some insurers waive this type of cover when a policy is bought within 14 days of departure, as the conditions may already be predicted to be poor.

Whole Fat Yogurt and Other Dairy Is Healthy, So Why Are We Still Eating Low-Fat?