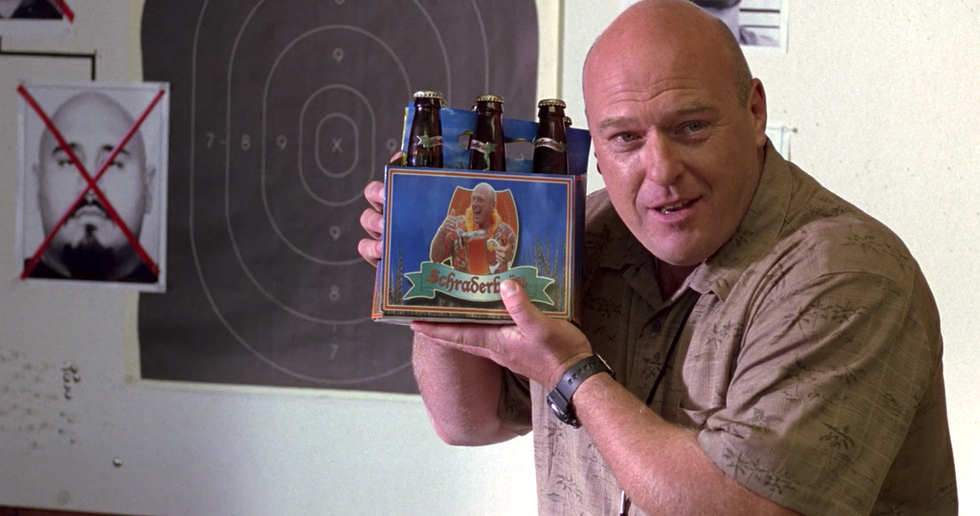 It takes a year like this one t0 remind us how great we really had it in 2013. Batkid was a hero to San Francisco, our president wasn’t a racist game show host, and we had one of the best television series ever in Breaking Bad, a show that answered the question, what if Hal from Malcolm in the Middle were a meth kingpin in the American southwest?

One of the best parts of Breaking Bad was Hank Schrader, the steadfast DEA agent with a heart of gold played with masterful middlebrow charm by Dean Norris. Uncle Hank provided the lion’s share of levity on a show where it was often in short supply, and in season two he had a lesser-remembered but extremely on-brand dabble in the world of home microbrewing. Fortunately for all of us, Sony remembered, and Schraderbräu may be coming to a fridge near you very soon.

According to The Blast, Sony Pictures Television recently filed for a “Schraderbräu” trademark, covering beer as well as related merchandise, including glasses, bottle openers, and branded clothing. Hell yes.

Norris himself has been teasing the new beer on his social channels, hyping it as “brewed to silky perfection.” His setup looks a little better than Hank’s garage, too.

It seems very clear that Schraderbräu is part of the promo for the new Breaking Bad film coming to Netflix. Details on that project remain sparse, but we know production began last fall, Vince Gilligan is directing, and it’s centered around Jesse Pinkman. Fingers crossed it’s a sign that we get at least one more appearance from Uncle Hank, but we’ll gladly take a German-style lager either way. Prost!

10 Ways to Connect With Locals on Your Travels

Should You Give Him Another Chance if He Ghosted and Came…