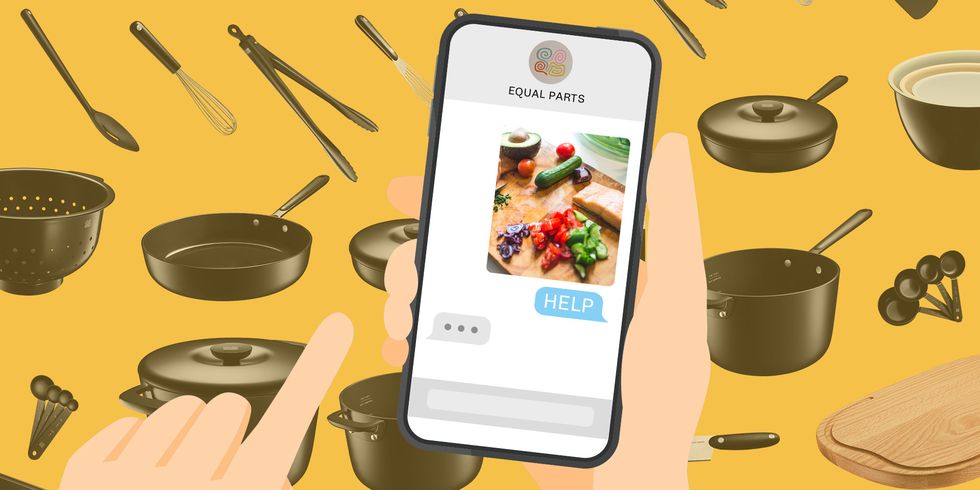 My generation doesn’t cook anymore. Things are fast, most of us don’t have the privilege of our own kitchen, and food delivery apps are so convenient that the laborious task of preparing our own pot of pasta seems more unappealing than ever. Why bother to boil water when we can have Yelp’s best-rated burrito schlepped to our fifth-floor walk-up in the time that it takes to remember our dad’s Comcast Xfinity password?

Equal Parts, which hails from the Pattern family of start-up brands, offers essentials for setting up your home kitchen, and then hooks you up with a text-based cooking coach service for a period of eight weeks. It may seem like an awkward elevator pitch (we already know how odd it feels to text our Lyft drivers), and nothing bothers me more than some new operation announcing that it is going to commodify and streamline what was already pure and good. But Equal Parts is unexpectedly wholesome. DMing a professional makes the tradition of cooking more appealing—and accessible—to a generation that is probably a few apps away from forgetting how to heat sauce.

You know when you’re a few years into a relationship and your partner is desperate to find a holiday gift that surprises you, so they get you a six-week coffee-roasting course, and at first it feels really exciting and fun but then very quickly becomes a part-time job? Equal Parts is not that. What it does is give you a few different sets of cookware ranging in price from $65 to $500 to choose from. On the cheaper end, you’re getting a good knife, or a pot or two, plus access to the coaching service. The full 20-piece set, which I was able to test-drive, includes just about everything you need to prepare a meal the old-fashioned way, plus the service. The cookware was reliable, easy to clean, and, best of all, stick-free.

And then there’s the coaching service, which, as of now, you can only get by purchasing some cookware. It’s one thing to get on the phone with a customer service representative, but texting a cook directly? About trivial little cooking questions? When my mother is just a phone call away? I wouldn’t dare! The texting part, though, actually feels like the ideal situation, once you try it. You don’t have to spend 20 minutes digging through personal essays on recipe blogs to find how much flour to throw in a roux. And, you don’t have to feel bad about not asking your mom how her day is going. Just one text to the service, and within like two-to-five minutes (sometimes even faster) you’re set up with a friendly, real-person coach, who’s there to give you whatever information you need.

I was hungover one afternoon and craving a bowl of macaroni and cheese. Since I have a dairy sensitivity, I was wary of going the full cheese route, especially after all the recovery I had done earlier that morning. I searched “dairy-free mac and cheese” on Google and was presented with dozens of weird search results, all of which seemed way more complicated than they needed to be. I happened to have coconut milk and vegan cheese on hand for some reason (I’m trying new stuff, okay?), so I figured, let’s give Equal Parts a text. After explaining my situation, a coach walked me through the steps of putting together the milk-less comfort food.

Text a cook directly? About trivial little cooking questions? When my mother is just a phone call away? I wouldn’t dare!

She spent some time digging through recipes on her end, pointing me toward the no-nonsense sources. Then, when I had some trouble with the sauce, she laid it out for me with personal tips. (Apparently you can’t thicken coconut milk with flour and butter the way you can with traditional cream. Huh.) We were exchanging questions, pictures, emojis, and by the end of the session, I sent her a shot of the finished product and felt like I had accomplished something. All-in-all, our communication lasted about two hours. I made the coconut mac-and-non-cheese again for work lunch a few days ago; it’s become a big part of my leftover arsenal.

Equal Parts also sends you a few texts throughout the month to encourage you to get back in the kitchen and whip something up, seasonal or otherwise. It can be a little bit annoying, but on the spectrum from spam mail to group texts, these sporadic nudges feel closer to a cooking newsletter—which is way more appetizing than a phishing scam. One text this month ended with: “Text us what’s in your fridge. We’ll tell you what to make.” This made me realize that the service could be used for so much more than just cooking tips in real-time. You have to get creative with it. You paid for it, after all!

So, the next evening, when I was coming home from the office, I hit up Equal Parts before I got to the grocery store and told them I wanted to learn how to make a chowder. We went back and forth for a bit, as I insisted this would not be a clam or seafood chowder (who wants the apartment smelling like clams?). We landed on corn, potato, and bacon. Coconut milk, again, instead of heavy cream. The coach talked me through the grocery store, and when I got home, I got cooking. What we ended up making was a variation on this Delish recipe. No sifting through self-indulgent recipe blogs. No video ads. No stuffy cooking jargon. And the best part? I sent a picture of the finished chowder to my coach, triumphantly. In all the times I’ve done this, they’ve responded, and unlike your mom, they always say good job—they have to!

After your eight weeks with the service, you’re off the list. But that doesn’t necessarily mean you’ll never be able to re-up. Equal Parts is all about customer feedback, even setting up pop-up shops around the country as part of its ongoing interaction with its community. Like the simple act of chopping up some onions, that tactile, human focus makes the brand so promising. A text-based cooking coach, of course, is no substitute for a real, flesh-and-blood companion who’ll spend time with you cooking over the stove. But what the service does best is eliminate the need for search engines, bringing your focus away from the black hole of the internet and back to the pan on the flame. And hey, if you’re all alone one night and need somebody to tell you exactly how long to roast the potatoes for your chowder, Equal Parts is just a text away.

Dom Nero
Dom Nero is a staff video editor at Esquire, where he also writes about film, comedy, and video games.

Brexit! How travel to Europe will change

15 Awesome Things To Do In Mexico’s Yucatan Peninsula