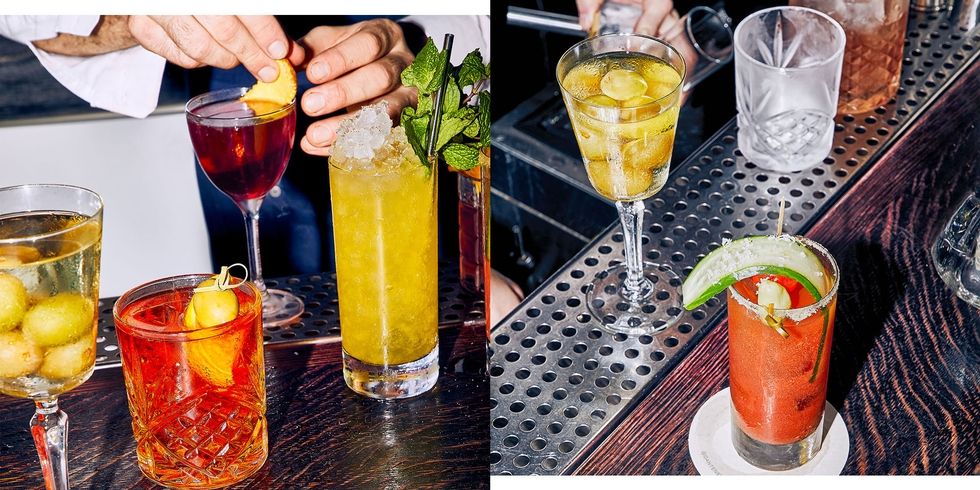 Instead of a Negroni (center), try vermouth with frozen grapes (left) or a Passion Fruit Mule (right) at Dante.

Dry January is such a drag. Oh, I understand the impulse behind it, believe me. The holidays have finally ended and your body feels like a smoking wreck at the climax of one of those marathon Mad Max chase scenes. The preceding year careened to the finish line in a slow-motion collision of liquid calories—a gantlet of open-bar office parties and family gatherings at which Just. One. More. Cocktail. was the only tenable strategy for psychic survival.

You wake up on New Year’s Day and you want to exert control. You proclaim to your loved ones that you have hereby Stopped Drinking, and it feels clarifying and energizing for a while. But like all resolutions, it begins to crumble—probably on that first evening you trudge home from a bad day at work, or maybe at the beginning of dinner in a fine restaurant at which it seems criminal to kick off your meal with orange juice.

There is another way, and its impact lasts longer than a month, provided you stick with it: Go dry-ish. Puritanical abstinence rarely works—unless, of course, you are grappling with actual addiction, in which case by all means stay the course. For those of us who plead guilty only to the charge of occasionally overdoing it, managed indulgence is the most effective corrective. It also happens to be a bit more . . . civilized.

We are lucky to be living in a golden age when it comes to pleasurable moderation. My fallback for decades has been a tall glass of seltzer with a splash of bitters, of which there has been a bumper crop’s worth of artisanal varieties—the bitters wake up the palate with the ghost savor of a cocktail but never threaten to intoxicate, and seem to get me in better shape for the real thing.

The bitters wake up the palate with the ghost savor of a cocktail but never threaten to intoxicate.

How lucky you are to have thoughtful friends behind the bar, like Stacey Swenson at Dante in New York, Aaron Paul at Alta in San Francisco, Kim Stodel at Providence in Los Angeles, and Bryan Dayton at Acorn, Brider, and Oak at Fourteenth in Colorado. All of them are committed to creating mocktails of complexity. Dayton can tell you about building up to a great meal with alcohol-free cocktails rooted in organic unsweetened cranberry juice—worlds away from Ocean Spray—or a frosty martini simulacrum made with chamomile tea and Fee Brothers grapefruit bitters. Matt Jennings, the chef and owner at Townsman in Boston, who has lost 160 pounds by adopting a strict health regimen, slakes his thirst with a mocktail made of apple cider, apple-cider vinegar, maple syrup, and a spicy dusting of gochugaru or pimentón to keep things interesting.

But it’s useful, in gazing dry-ishly at a beverage menu, to view booziness on a spectrum, and for those who prefer the purr of a slight buzz, there is the commensurate surge of excellent vermouths. Visitors to Dante know to expect vermouth with a tantalizing accompaniment of Perrier and frozen grapes. Guests at Huertas, in New York’s East Village, know that nothing goes better with fatty, salty anchovies and croquettes than the restaurant’s herbaceous, house-made red vermouth—a bittersweet sip inspired by co-owner Nate Adler’s research trips to Madrid and Lisbon. A giant cube of ice, a generous pour—you’ve got the intrigue of a stronger spirit without the inclination to get sozzled.

Even better, listen to Stodel—“I love low-ABV cocktails; I think they’re totally crushable,” he says—and consider flipping the proportions of a classic so that vermouth takes the lead and a harder spirit sings backup. How about a daiquiri, even, with two ounces of sweet vermouth and half an ounce of dark rum? From the standpoint of a dry-ish January, that probably qualifies as a slippery slope. On the other hand, as Stodel puts it, “You don’t want to be boring.”

How to Make Dry-ish Drinks at Your Home Bar

Bitters: They’re not just for mustachioed bartenders. Add a few drops to club soda for a bit of cocktail flavor. Favorites include the Hudson Standard’s spruce shoots and Bittermens Hopped Grapefruit.

Vermouths: Think of a big, complex, flavorful vermouth—like those from Ransom and Alysian—as a drink that’s in between a wine and a cocktail. Serve it on the rocks and you’re done.

Italian Sodas: Italians practically invented the low-alcohol drink with the spritz. They can also take your soda game to the next level: Sanbitter has the robustness of a Campari and soda, without the alcohol.

A Taste of Trastevere in a Hidden Roman Villa

Is Becoming a Copreneur with Your Romantic Partner Right For You?