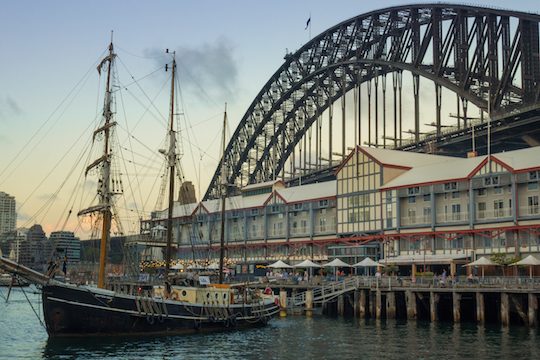 Whether you live in Sydney or you’re a first-time visitor, you can’t witness the majestic Sydney Harbour without a soulful longing to be out on the water. And when there are one million people lining the harbor to see the world’s biggest fireworks display on New Year’s Eve, the only way to escape the crowds is setting sail.

The Tall Ship New Year’s Eve Dinner Cruise is the perfect tour for anyone searching for the New Year’s Eve celebration of a lifetime. It’s an evening that will trump every other, and make your friends green with jealousy.

The booking process was simple. We received a phone call and email the day before with directions to the departure wharf and meeting time. Thankfully it was only a short walk from our hotel and we arrived promptly at 7:45pm for an 8pm boarding.

Having walked around the city that morning and witnessed the multitudes that spent the entire day waiting for this moment, I could not have been more thankful to be leaving solid ground and boarding our 1850’s style tall ship, the Southern Swan.

The Southern Swan was built in 1922 and holds only 90 guests. There was plenty of room to move around and it didn’t feel crowded. When it sailed into the port to collect us, I literally swooned. Crafted from Danish oak, the Southern Swan first sailed to Australia in 1988 to be part of the Australian Bicentennial First Fleet re-enactment and has lived at The Rocks ever since. The ship’s beauty and majesty was a sight to behold. Long firm lines, tall sails, wooden decks. Straightaway, I knew this was going to be a night to remember. The authentically aged wooden planks of the ship set the stage nicely. Seating could be found everywhere from railings, to benches, to boxes.

We gathered at the front of the ship for a quick safety briefing and then the drinks flowed. The entire 6-hour cruise included an open bar of soft drink, juice, beer and wine. And soon, we detected the delightful scent of food wafting from the galley kitchen. Staff made their way around the ship throughout the night delivering finger food to guests. Our choices included prawns, mini pies, meatballs, sushi and more. Desserts of brownies and fresh fruit followed.

During the first part of the evening, we sailed under the famous Sydney Harbour Bridge and sailed by the Sydney Opera House before stopping for the 9pm Family Fireworks. After these finished the boat turned on its sparkling fairy lights to join the Harbour of Light Parade and our boat was off again on a tour of the harbor.

Under the twinkling lights, the mystic moon, and the most iconic Sydney landmarks, the magical evening flew by. Hours were filled with live music and good laughs with our fellow shipmates.

It seemed far too soon that we were dropping anchor in our nominated spot to witness the stunning midnight fireworks display that welcomed in 2017 with a big bang. Over 30,000 pyrotechnic effects lasting 12 minutes were set off from the Sydney Harbour Bridge in front of us and even barges behind us. I didn’t know which direction to look, it was all so enchanting. Without a doubt, we had the best vantage point in the harbor.

After the fireworks finished we started cruising the harbor again, slowly making our way back to the dock just after 1:30am. We hugged fellow guests and stepped onto land in a brand new year. Nothing could have been more delightful than this special night.

Want a New Year’s Eve to remember? Then Sydney, Australia is it. But don’t join the landlubbers for a glimpse of the fireworks behind someone else’s head. Get aboard a tall ship and party the night away like it’s 1849.

Heads-up, dear travelers: Although this is a seasonal attraction, Viator has plenty of water-centric activities like this and more. Check it out and let us know how you enjoyed them below!

The Sun, The Moon, and the Truth | Nepal

Reese’s Peanut Butter Cups Think They Are the Best Candy. In Fact, They’re the Worst.