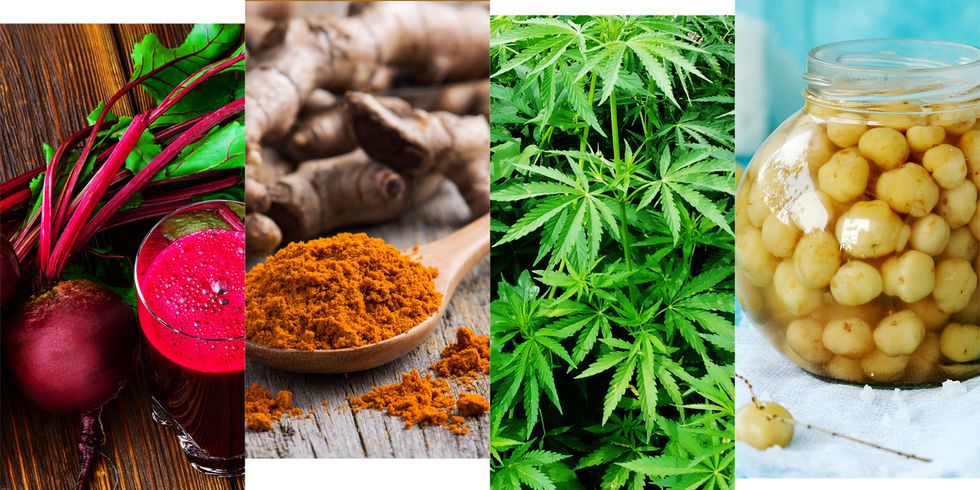 This is the year to break out of your cocktail rut. You know the one: the same drink ordered at the same bar on the same night of the week, every week. Craft bartenders across the country are scheming up new cocktails with fresh ingredients and methods, dabbling in everything from cannabis to fermentation. Besides adding new flavors, some of these ingredients also happen to double as tonics for your body’s aches and pains. And in a year when we’re trying to be good to ourselves and good to the world, relaxing with a boozy beverage that surprises your palate isn’t a bad way to go about it. With that in mind, these are the five cocktail trends that have us the most excited about ordering a drink in 2018.

For a new kind of buzz, add CBD oil.

Anything with marijuana is tricky, what with people like Jeff Sessions looming over our legal system, and I’m not about to argue that CBD oil is 100 percent legal in all 50 states, because it isn’t. There are different classifications for different kinds of CBD oil—some comes from hemp; the stronger stuff is taken from the marijuana flower—and you’ll have to navigate those cannabidiol waters on your own. But as Americans put aside their pot prejudices, CBD users are spreading the gospel about its anti-inflammatory, anti-anxiety, anti-nauseaproperties. It was only a matter of time before we start mixing it in with our booze.

Gracias Madre, a plant-based Mexican restaurant near the Cali coastline (where recreational marijuana is legal), has been serving CBD-tinged cocktails for a few years. The allure is both medicinal and mellow. “Some people are like, ‘Oh man I’m a total stoner, and I think that’s so cool,’ and some people are these 70-year-old women who are like, ‘My granddaughter got me into CBD for my arthritis,'” says Max Reis, beverage director at Gracias Madre. “It does add a chill factor which is nice. I think the term ‘angry drunk’ exists in this world, and maybe that might help alleviate that.”

The flavor profile for CBD cocktails completely changes depending on the oil, but Reis doesn’t use oils that mask the marijuana taste. So choose a tincture that preserves that natural skunkiness and squeeze in a few drops. As for your base spirit, “You just have to think vegetal and plant-y. Whisky and mint go together great in a mint julep, so you can play on that. Gin is vegetal, you can pop it in there,” he says. And one final tip: use 15mg of CBD per cocktail. It’s the tried-and-true dosage at Gracias Madre.

Combine yuzu and half stone fruit in a bar tin and muddle. Add the other ingredients, shake with ice, then strain over rocks. Garnish with seasonal fruit.

Swap out fruit juice for vegetables.

Vegetables are good for you. And while we’re all of the mindset that healthy eating is cool and juicing is never going to go away, bartenders are increasingly experimenting with a veggie juices and syrups to dress up traditionally fruit-forward classics. Don’t worry—no one’s asking you to accept zucchini spritzes or juleps with muddled romaine. But many vegetables have distinct flavors, from sweet to earthy to spicy, that pair quite well with certain spirits—especially vegetal ones.

For instance, when P.Y.T. opened in 2016 as vegetable utopia in downtown Los Angeles (to rave reviews), its bar stocked beet juice, celery juice, red pepper, and carrot. Now, it stocks with the season, playing with sweet fruits or savory vegetables to create a cocktail list that complements what’s fresh and ripe in grocery stores. “We consider produce produce,” says Genevieve Hardison, director of operations at P.Y.T. “We love fruits and vegetables equally.” Now you can make the argument that your next cocktail, like their celery margarita, is for your health.

Combine ingredients in a tin, add ice, and shake. Strain onto fresh ice in a rocks glass. Garnish with lime wheel.

Fermented drinks are great for your gut.

Liquor isn’t exactly known for its stomach-calming qualities, but this is the year of the gut, and that holds true for cocktails. Chances are you’ve had a pickleback before, but there are other, classier ways to pack probiotics into crafted drinks. Some bars are dabbling in mixers like kefir, a sour-tasting drink made from fermented cow’s milk, and kombucha, that dank, fizzy, fermented tea that health nuts swear by. In fact, P.Y.T. has a cocktail called Night Vision, made with gin, carrot juice, ginger syrup, lemon juice, and kombucha. And Chauhan Ale & Masala House in Nashville has an entire in-house fermentation program for fruits and vegetables (like gooseberry and pumpkin) to supplement its drinks list. So get used to the sour, tangy side of cocktails. Your body will thank you.

Combine ingredients in a tin with ice, shake, then strain into a coupe glass. Top with sparkling wine.

Try turmeric, the buzziest spice of the moment.

Call Me in the Morning at Zahav.

Turmeric has been around for thousands of years, but there’s no doubt that it’s having a moment—like matcha not so long ago. The gorgeous, golden yellow spice has a pungent flavor reminiscent of peppers and ginger and a rich culinary history in India. And speaking of your gut, it has long been considered an anti-inflammatory with antioxidants to boot (though the scientific community hasn’t yet made a ringing endorsement of it). It is ripe for cocktail experimentation. At Michael Solomonov’s Israeli restaurant Zahav in Philadelphia, bartenders steep turmeric root into a cordial, mix it with tequila, then brighten its earthy flavor with pops of cucumber and cilantro.

Call Me in the Morning

Muddle turmeric root, cucumber, and cilantro. Add tequila and cordial, then shake and pour into a highball glass. Top with club soda.

Sustainable bartending is a cause worth drinking to.

Sustainability is perhaps the most important cocktail trend of 2018, because it’s literally about saving the world. The environmental costs hidden in a single drink are too complicated to outline here, but let’s just say that between out of season fruit, liquor from afar, and plastic straws, waste behind the bar is the norm. Transportation is the biggest hurdle for smarter cocktail making, says Chad Arnholt of Tin Roof, a New York company that consults bars on sustainable practices. “If I’m buying a bottle of vodka that’s produced in California, it has to get on a truck and drive its way out here. That’s going to in some cases double the carbon footprint of every drink that I make with that vodka,” he says. “Often you can be more sustainable by buying something that’s nearby.”

Fig+Farro, which just opened in Minneapolis, has a mission: serve all vegetarian, mostly vegan food to combat climate change. Its “bar guy” Ryan Matheson applies that to spirits. Wine is served from a tap system, and he stocks cans of beer instead of glass bottles to cut down on wasteful packaging. Syrups are made in-house. And spirits are hand-crafted and produced locally when possible. (He even has four different Minnesota-made rums on the menu.) For one drink in particular, the Hunt Saboteur, Matheson whips up excess water made from boiling chickpeas instead of egg whites to create a frothy, creamy texture. “We’re reducing our carbon footprint, decreasing our portable water usage, and just trying to be good stewards to the world at large,” he says.

This is the mindset Arnholt wants to spread through the bartending community. “It won’t be a thing we brag about doing because we’re woke,” he says. “It’ll just be a thing we do.”

Combine ingredients in a tin with ice. Shake, then strain into a mixing glass. Shake without ice until frothy. Garnish with a lemon twist.

18 Fast and Filling Recipes That Won’t Stress You Out

How to live with irregular working hours?