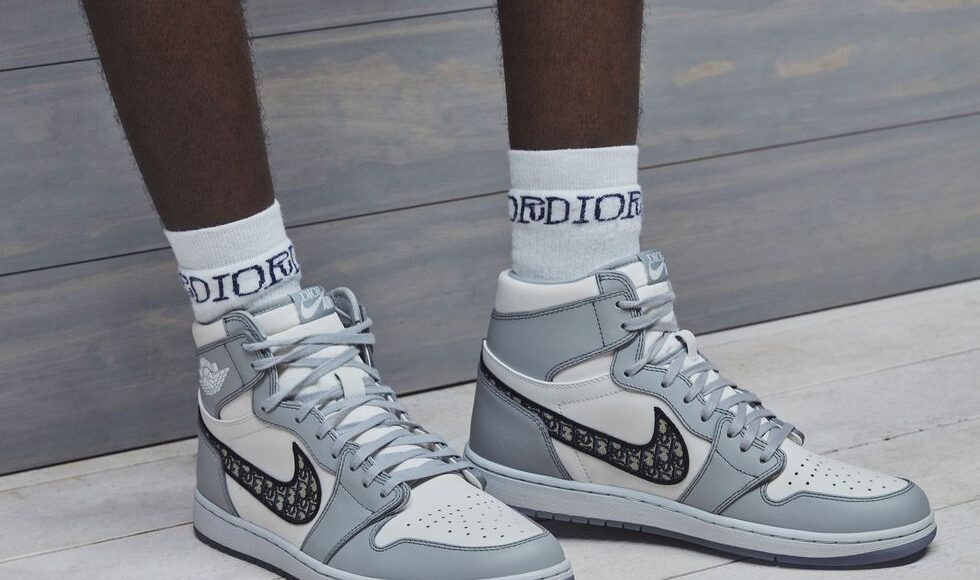 Last night, amidst the scrum of Art Basel Miami, Dior Men sent its pre-fall 2020 collection down the runway. It was a night of firsts for the Parisian fashion house—the first time it has unveiled a men’s collection in the States, as well as the debut of the work with designer Shawn Stussy, who reworked the house logo as well as the Dior bee. (Stussy sold the company that bears his name in 1996, so this was a big deal for fans, among them Dior Men designer Kim Jones.) But those weren’t the only debuts that caught people’s eyes.

When they weren’t wearing techy sandals or boots with “Dior” scrawled across them in Stussy’s signature style, the models had Air Jordan 1s on their feet.

Or, perhaps, we should call them “Air Dior 1s,” considering that “Air Dior” is indeed what’s stamped over the iconic Jordan wings logo. In truth, the two collaborators have landed on a somewhat more staid moniker: the Air Jordan 1 High OG Dior. It’s the first silhouette in an upcoming collection from Jordan and Dior, and though the name is a little standard-issue, the shoes are anything but.

The sneakers are made in Italy, using the same leather that Dior uses for its bags. That leather is edge-painted, and rendered in Dior Gray, the house’s trademark color since its founding in 1947. Aside from the embossed “Air Dior” branding, the Nike Swoosh is done up in the Dior Oblique jacquard, a nice melding of iconography from both partners in this project.

“I love mixing together different worlds, different ideas—and Jordan Brand and Maison Dior are both emblematic of absolute excellence in their fields,” Jones told Nike. “To bring them together in this special collaboration is to propose something exciting and truly new.”

The Air Jordan 1 High OG Dior will debut in April of 2020, and will be available globally in select Dior stores. No word yet on the price fans can expect to pay, but considering the absolute havoc on the release day for Jones’ last high-profile street-meets-fashion collab—Louis Vuitton x Supreme, when he was still stationed at the latter—price isn’t likely to be the biggest concern for hopeful shoppers. Just getting a pair at all will likely prove to be quite the challenge. Still…fingers crossed.

Jonathan Evans
Jonathan Evans is the style director of Esquire, covering all things fashion, grooming, accessories, and, of course, sneakers.

5 Boundaries That Actually Bolster Your Bond in Your Marriage

An Open Letter to Prince Harry and Meghan Markle