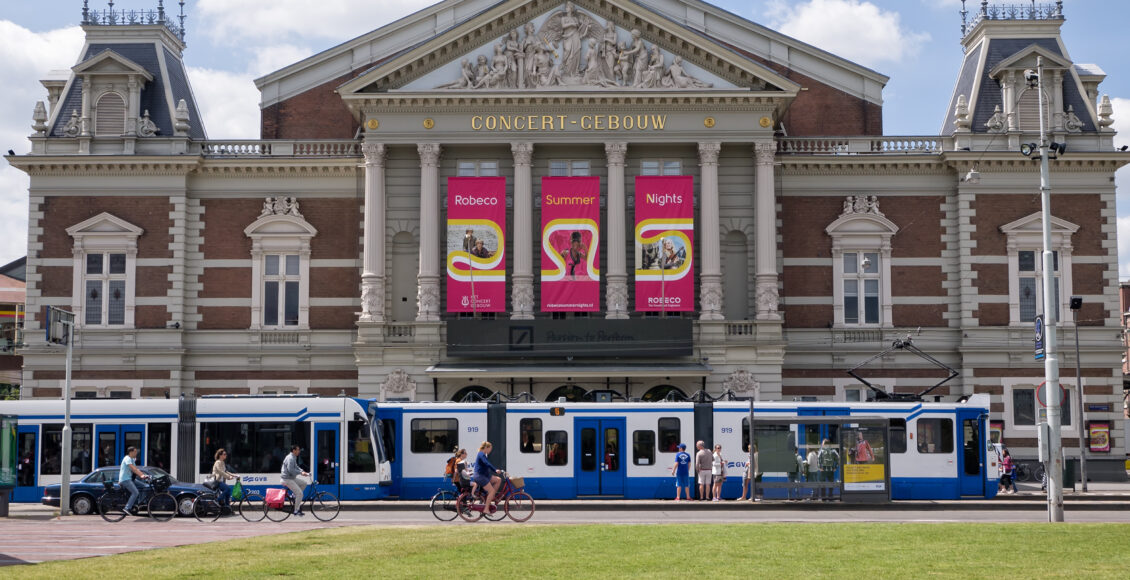 What makes a great concert hall? The conductor? Acoustics? The design? All these elements come together in the concert halls of the world’s top classical music cities.

In addition to the venues mentioned below, there’s the beautiful architecture of the Sibelius Hall in Lahti, Helsinki and the fabulous Frank Gehry–designed Walt Disney Concert Hall in Los Angeles, which scores a double whammy as it is also noted for its record-beating acoustics. And for sheer romance, you can’t beat a balmy open-air operatic concert at the ancient Arena in Verona, Italy.

Opened in 1888, Amsterdam’s neoclassical Concertgebouw is one of the world’s best-loved concert halls, proving that not everybody heads for the city intent on boozy weekends, clubbing, and soft drugs. The Great Hall is universally revered for its perfect sound quality, and the concert hall is home to the renowned Royal Concertgebouw Orchestra, as well as the Netherlands Philharmonic and Chamber orchestras. The concert season runs from September to June, with free lunchtime concerts held year-round at 12:30pm every Wednesday. The Robeco Summer Nights series of jazz, classical, and opera-lite concerts take over the hall for summer.

The Center for Performing Arts in Beijing, China.

In a city more renowned for its Chinese opera and martial arts than Western-style classical music, the controversial and blingy glass dome of Beijing’s Center for the Performing Arts has nevertheless been a resounding success with the burghers of Beijing. The concert hall, known locally as the “Giant Egg,” opened in 2007 and includes three performance halls seating a massive 5,452 people, as well as a mesmerizing calendar of orchestral concerts, classical and contemporary dance, hard-hitting drama, and opera—Chinese and Western in style. There’s also much on offer for families, from traditional acrobatic shows to the musical version of Kung Fu Panda.

The Philharmonie sits in the Berlin’s stylish Kulturforum, built when the city was divided by the Iron Curtain to show the people of East Germany what they were missing. Designed by Hans Scharoun and opened in 1963, it is one of the world’s great concert halls thanks to its acoustics, and it is home to the world-acclaimed Berlin Philharmonic, which was brought to fame by impresario Herbert von Karajan during the post-war period. Sir Simon Rattle has led the orchestra since 1987. Concert seasons start at the end of August, and there is also a full schedule of concerts in the smaller Chamber Music Hall.

Boston’s Symphony Hall is home to the Boston Symphony Orchestra.

Historic Boston’s neoclassical Symphony Hall opened in 1900; it was built for the Boston Symphony Orchestra and still remains home to the leading orchestra. The architects of the auditorium employed an acoustics expert to ensure the quality of sound, placing it among the best concert halls in the world. Led by youthful Latvian conductor Andris Nelsons, a full schedule of orchestral and operatic performances occurs from September through June, while the crowdpleasing Boston Pops, who first played in 1885, join in with crossover concerts in the summer months.

The Royal Albert Hall in London hosts the popular Proms series of concerts.

Opened in 1871 by Queen Victoria, the barrel-shaped Royal Albert Hall is a massive venue with an audience capacity of 5,272. These days, it is best known for the Proms, the popular classical music concert that runs between July and September and features some of the best artists in the world at decent ticket prices. Other mainstays of London’s classical music scene include the Royal Opera House (ballet as well as opera) and the two concrete monstrosities of the Barbican and South Bank, whose aesthetic deficiencies are more than compensated for by the quality of their concert repertoires.

Sophisticated and cultured Milan is stuffed with quality museums and galleries, a soaring cathedral, and a shopping scene to rival London, New York, or Paris, but it’s also home to the second most famous opera house in the world. Teatro La Scala was built in the late 18th century, a flamboyant theater swathed in red velvet, crystal chandeliers, and gilding. Its season kicks off on December 7 each year, and the repertoire consists of opera, ballet, and classical concerts. Attending a performance is a dressy affair and tickets are generally booked far in advance, but same-day tickets are released 2.5 hours before curtain up.

In addition to cloud-piercing high-rises, fabulous shopping, and its bevy of Broadway musicals, New York is endowed with a brace of world-class classical music venues. Carnegie Hall was built by the famous philanthropist in 1891, and its three auditoriums are thriving under the leadership of artistic director Clive Gillinson; it has no resident companies but offers a roster of classical and chamber music concerts. The Lincoln Center is a one-stop classical entertainments complex, encompassing the New York Philharmonic Orchestra, Metropolitan Opera House, New York City Ballet, and NYC Opera, with the season lasting September to May.

The Sydney Opera House is one of the most recognizable buildings in the world. Designed by Danish architect Jørn Utzon in 1973, it sits on the flank of Sydney Harbour, crouched opposite the equally iconic Harbour Bridge. In a city celebrated for its beaches and outdoor activities, it is home to seven different performance venues and more than 1,500 performances of ballet, opera, circus, classical music, and drama attended by more than one million people every year.

In tune with its reputation as one of the world’s fastest-moving, forward-looking cities, Tokyo also has a remarkable classical music venue. The Tokyo Opera City Concert Hall may be no great architectural shakes with its skyscraper exterior, but many musicians regard it as home to some of the best acoustics in the world. The theater opened in 1997, and its auditorium was carefully designed in “shoebox style” with a pyramid-shaped interior clad in oak to help with resonance and reverberation. It is home of the Tokyo Philharmonic Orchestra, conducted by South Korean Myung-Whun Chung, and holds an audience of 1,632; the smaller Recital Hall seats 265.

Vienna’s Musikverein still has a place among the best concert halls in the world.

Long one of the leading bastions of culture in Central Europe, elegant Vienna is home to peerless concert halls. First among equals is the Musikverein, the neoclassical style home of the Vienna Philharmonic Orchestra. Built in 1870 by Theophil Hansen, it is still regarded as having some of the best acoustics in the world, thanks to the Great Hall Auditorium’s long and high but narrow design. It can seat 1,744 people, with standing room for 300 more, and is the venue of Vienna’s traditional New Year’s Eve concerts, which are televised across the world.