How Drinking Whisky Taught Me to Be Thankful 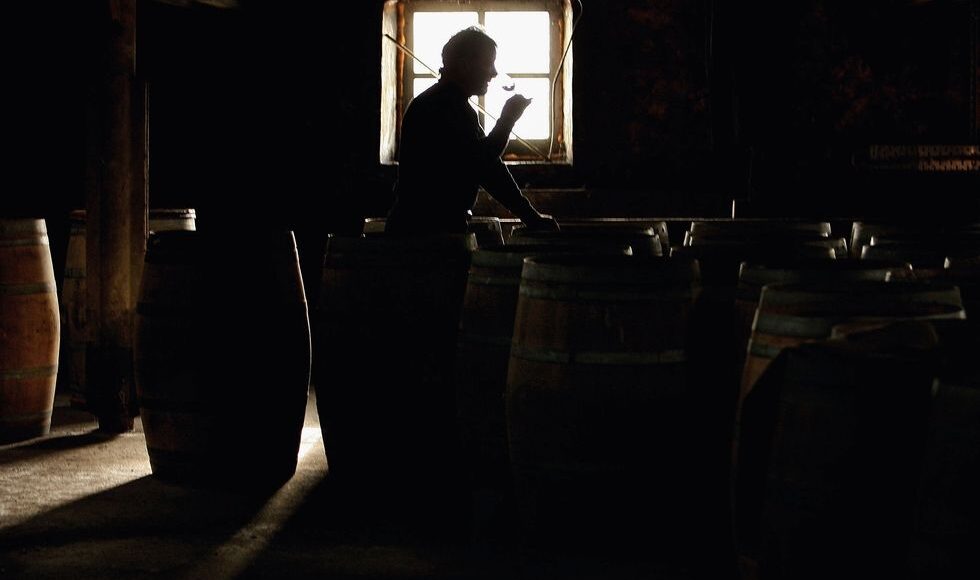 The service on Islay is total shit. For an extremely online American, it’s a haunting realization. When my Loganair twin-engine turboprop touches down at Islay Airport, I do what I always do upon landing. No, I don’t look out the window at the majesty around me, the rolling rural lands of a place I’ve never been to before. Instead, I pull out my iPhone and immediately search for a signal. I absolutely have to see all the email I’ve received in the, oh, 35 minutes since we took off from Glasgow.

Inside the tiny airport, while standing around a baggage claim somewhat akin to a restaurant coat check, I likewise try to connect to the WiFi with an increasing sense of urgency as it refuses to work. If I can’t get on, how can I upload an Instagram story that will let my friends back in America know I am doing something better than them?

How can I upload an Instagram story that will let my friends back in America know I am doing something better than them?

As the shuttle van takes us from the airport toward the village of Port Ellen (population: 810), I look out the window because, well, the supposed WiFi on the van won’t work either, rendering my phone worthless. There is nothing to see besides grass, sky, and maybe a few grazing cow or sheep. Not even a traffic light. Upon reaching Port Ellen, I don’t see much more than that. On Islay, there are literally no chains. Not a Burger King at the airport, not a Residence Inn in town. But I can’t help but smirk when I see the sign for a “CyberCafe.” What year is it?

Upon my arrival at the No. 1 Charlotte Street bed & breakfast, before I’ve even dropped my bag and checked in at the front desk, I locate their WiFi network and…

…I still can’t fucking get online.

I’m freaking out and desperately need a drink. Luckily, drinking is the reason I’m here.

Though just 239 square miles with a tick over 3,000 inhabitants, Islay produces, if not the best, certainly the most distinct whisky in the entire world. These highly peated offerings come from a mere eight distilleries, mostly dotted around the perimeter of the island. You hardly have to be a connoisseur to recognize the brands, but the island is so remote you have to wonder how the world came to ever hear of their products. It certainly wasn’t via e-mail.

There’s Bowmore and Bruichladdich. There’s Caol Ila and Kilchoman. And on the south end, where I’m staying, there is what must surely be the best street sign in the world:

In 2013, this troika of distilleries banded together to build a walking path that was just finished last year. Apparently, too many drunk American tourists had gone distillery-hopping on the small winding road, and many were getting nailed by cars, which sounds exactly like something that would happen to me.

When taking a red-eye to a foreign country, my jet lag strategy is to immediately throw myself into heavy drinking. It’s 11 a.m. in Islay, and I’m ready for some scotch, so I head to Ardbeg, from where I’ll work my way back to Port Ellen.

Like its south Islay brethren, Ardbeg was built along the rocky coastline where the North Channel of the Irish Sea meets the Atlantic Ocean. All the buildings on its campus are a stark white, with “ARDBEG” written on the one closest to the water in million-point all-caps font. That was so, back in the day, steamboats arriving with supplies would know where to actually go. It probably still comes in handy now, because Google Maps doesn’t work here either.

If most distilleries in America seem like ugly warehouses, gussied up a bit on the outside to be somewhat palatable to visitors, the distillery buildings in Islay are truly beautiful. They’re like quaint seaside resorts whose residents are all copper stills and barrels of whisky.

Say it with me: Of course there’s no damn WiFi in these warehouses.

Instead, it’s a better kind of sensory overload. Ardbeg is generally agreed to be the “most” peaty whisky in Islay. You inhale the “angel’s share” of scotchy fumes escaping the miniscule pores of the oak casks, the mustiness of the centuries-old brick walls and wood rafters of the building, the tactical texture as your shoes crunch the gravel floor. Dr. Bill Lumsden, the director of distilling, serves me some scotch straight from a giant cask of sherry. I can’t help but close my eyes as I sensually smell it. Smoke, iodine, habanero pepper even. I keep them closed as I sip it and take the slowest, most thoughtful swallow ever. Citrus, mesquite, saline, seaweed. The complex flavors just keep coming. It’s truly hard to worry, to think about anything else besides this whisky.

It reminds me that I really should take a picture or two for when I finally find some WiFi.

Even for a drinks writer preternaturally focused on what’s in the glass, my drinking today is always done in the midst of distraction. A constant stream of food arriving, waiters and bartenders checking in, music blasting, sporting events on bar TVs, everyone with their phones out, constantly taking pictures and selfies and surfing and tapping and tweeting and texting away. No one paying attention to their drinks, each other, their lives.

That’s not the case in Islay.

That night, after visiting some other distilleries, I head to the Islay Hotel which has, as far as I can tell, the only bar open in all of Port Ellen. You might not be surprised to hear Islay doesn’t exactly have a bustling nightlife scene. Even so, this small inn’s bar is completely packed, mostly with locals, save for a few boisterous whisky tourists from America.

Some friendly local lads, all of whom work at one of the distilleries, notice me, surely because I am taking a dozen shots of each dram before having a sip. They invite me to join them. I am drinking a £28 glass of Ardbeg Galileo that I took a good 10 minutes to decide on; they are all drinking Smirnoff and Cokes.

“Do you ever drink scotch?”

“Yeah,” responds one young man who works at Lagavulin, “but not when we have to work the next day.”

More interesting than these Scotsman drinking vodka, I notice that none of them have their phones out. They are not taking pictures of every drink they order, every plate of drunk bites that comes to the table. They aren’t constantly on Facebook and Twitter, either, wasting away their lives creating content, responding to content, sharing content. Hell, they might not even own smartphones. They are simply drinking and enjoying each other’s company. That’s their content.

On many days you can’t fly to or from Islay because the fog is too thick, or the gales are too powerful, or for whatever reason there’s just no way to safely land on the small airstrip. Luckily, you can also leave by a long ferry ride. En route to that departing ferry terminal at Kennacraig, you will come upon a viewpoint called “Rest and Be Thankful.” It is said back in the day, travelers would stop and heed that advice before continuing on their way.

I’ve never been to another destination on planet earth where you actually have time to rest and be thankful while you drink. In fact, in Islay, there’s literally nothing else to do. It’s like a Caribbean island in that sense, except it’s frequently rainy, kinda chilly, and surely no one owns a bikini. In Islay you just have to give yourself over to the island, over to the intoxication of the scotch, and over to the pure present.

Thus, this lack of quality WiFi is a good thing. It forces you to keep your head up and to be in the moment, to appreciate the Scottish island’s beauty and tranquility, its complete lack of commerce and dearth of people. It forces you to totally use your senses and not just your smartphone fingers. To consider the smell and taste of your whisky dram, as opposed to worrying about the best way to send that Instagram post out into the world.

By the end of my first day in town, I will have finally made peace with these facts. I will look forward to visiting even more distilleries the next day. Maybe I won’t even take my phone with me.

After walking the few blocks back to my hotel a little after 1 a.m., dead tired, drunk, and ready for bed, I pull out my iPhone to check the time and notice something: I actually get four bars of service if I stand perfectly still in the foyer!

Has Technology Made Us Cheaters?

9 Creative Ways to Connect with Your Wedding Guests