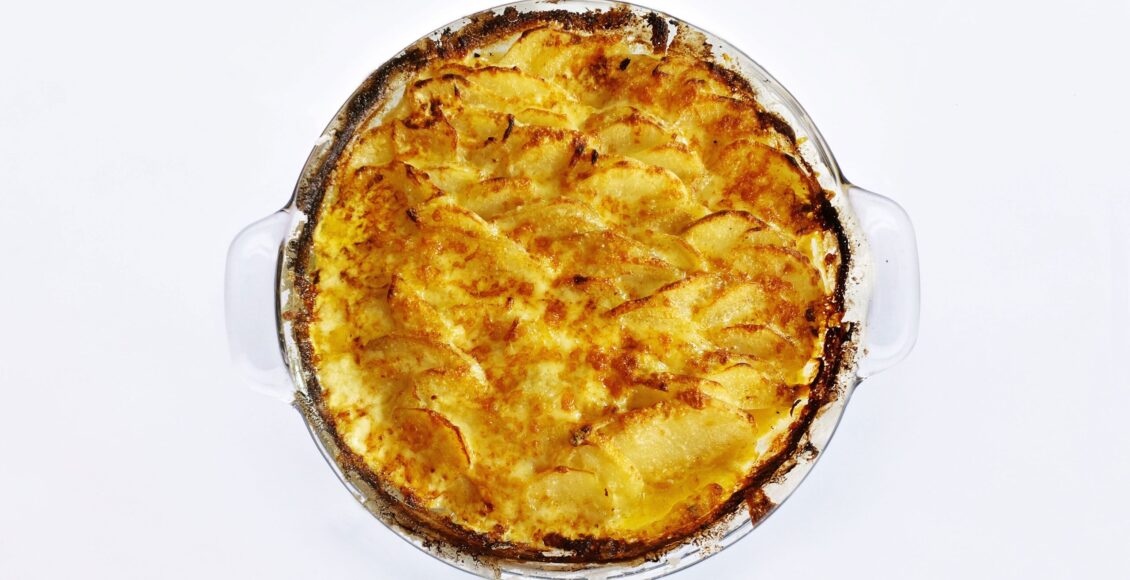 In case you need even more proof that cheese and potatoes make a miraculous combination, we present this decadent-yet-elegant casserole, where nutty Gruyère, sharp cheddar, and cream bubble around thinly sliced russets. While many recipes for gratin and scalloped potatoes layer the potatoes so that they’re lying on top of one another, Carla Lalli Music positions the slices nearly vertical, which ensures even cooking and means ever slice has a crispy side (the best part). Made in a pie dish instead of a 13×9″ baking dish, it’s also a much more reasonable quantity for a small gathering. Do take the time to peel your potatoes—unencumbered by their skins (which tend to dry out in the oven), the thin slices can soak up all of the delicious cream and turn totally tender.

All products featured on Bon Appétit are independently selected by our editors. However, when you buy something through the retail links below, we earn an affiliate commission.

Butter one side of a large (12×12″) square of foil with room-temperature unsalted butter. Line a large rimmed baking sheet with another sheet of foil. Place a rack in upper third of oven; preheat to 400°.

Grate 3 oz. sharp white cheddar (not aged) and 3 oz. Gruyère on the large holes of a box grater (you should have 1 cup packed of each). Place in a medium bowl, gently toss to combine, and set aside.

Scrub 3 lb. russet potatoes (about 6 medium), then peel. Using a sharp chef’s knife (or a mandoline if you have one), slice potatoes crosswise into ¼”-thick rounds, transferring to a large bowl as you go. Very thinly slice ½ large yellow onion crosswise into half-moons, then add to bowl with potatoes.

Place pie dish in front of you and imagine that it is the face of a clock. Arrange potato slices in a row in dish, overlapping by about two thirds, to extend in a straight line from ten o’clock to two o’clock (don’t worry about the onions; some will stick to potatoes and come along for the ride, and some won’t). It’s okay if the potato slices are lying flat at this point. Repeat with another row beneath the first one, arranging so second row overlaps halfway over first row.

Using your hands, push both rows of potatoes gently toward the top edge (twelve o’clock) of the dish until they slide up the sides toward the rim, and are eventually perched on their outer edges at a steep diagonal and fit snugly into the pan.

At this point, the potatoes should stay in place, and you can shingle more potatoes into the dish, row by row and overlapping as before, periodically pushing potatoes snugly together, until the dish is full. Tuck remaining slices of potato and onion in bowl into any available slots (you may have a few pieces of potato that don’t make it into the dish). Discard liquid left in bowl.

Place pie dish onto prepared baking sheet (for catching any drips), then gradually pour 1¼ cups heavy cream over potatoes. Top with half of cheese mixture. Cover dish with prepared foil, buttered side down, and crimp very tightly to close.

Bake gratin until potatoes are tender when pierced with a paring knife or skewer (uncover to check), 60–75 minutes. It’s okay if some cream has overflowed and browned—that’s what the foil lining is for.

Remove gratin from oven and heat broiler. Carefully remove foil, directing the steam away from your face (it will be hot under there), then top gratin with remaining cheese mixture.

Broil until cheese is bubbly and browned, about 4 minutes. Let gratin sit at least 10 minutes before serving.

Desert, flamingos and snow: Why Chile provides a road trip…