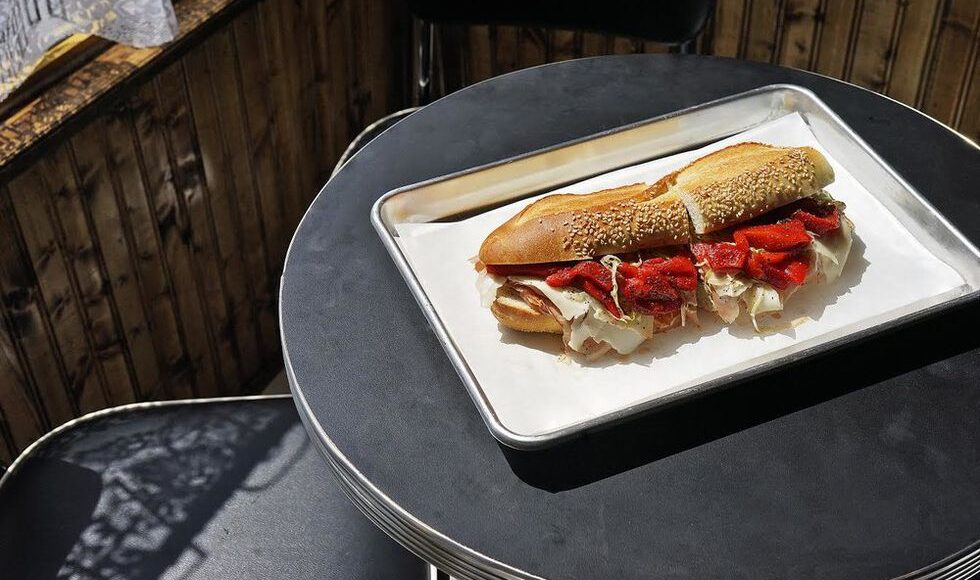 Roman Grandinetti says he has to call me back.

“Some people are here, and they’re worried the pipes in the basement are going to explode, so they want me to replace them. This isn’t even my building,” he laughs. “That’s New York.”

We’re on the phone to talk about changes coming to Regina’s Grocery—his restaurant—the Lower East Side sandwich shop where Regina—his mom—sculpts masterpieces out of cured meats, roasted peppers, and semi-hard cheeses, piled high atop loaves of stirato and semolina. There are 14 sandwiches on the menu, all named for family members and friends that played a part in Grandinetti’s upbringing: the Cousin Cristina, the Uncle Phil, the Ricky. And it’s fitting, because in the very Italian neighborhood of Bensonhurst, Brooklyn, where he grew up, few things brought people together like food.

“We used to go to this place called John’s Deli. They had the craziest roast beef sandwich of all time,” he says. “Every real dude, every construction worker, every wise-guy from the movies would be lined up out front. You never knew who you were going to see. It was more than just a sandwich, it was a whole scene. That was my home.”

It was more than just a sandwich, it was a whole scene. That was my home.

Regina’s Grocery, or just Regina’s, is part of a handful of spots infusing a new energy into the neighborhood. With Scarr’s serving up old-school, wood-panel pizzeria vibes just across the street, a revamped Bar Belly next door, and literal hole-in-the-wall barbershop Human Nature (also Grandinetti’s handiwork) only a few steps away, Orchard Street is quickly transforming into one of the coolest blocks in the city. And if you ask Grandinetti, that neighborhood-as-family culture is a big part of the reason why.

“It’s amazing. We’re all extremely supportive of each other,” he says. “And Regina’s itself is supportive of what we were raised on. We go to Di Palo’s for mozzarella, we go to Parisi Bakery for bread—I mean, those guys make sandwiches. There’s no competition. We’re just trying to have fun and embrace it.”

I’m a fucking guido from Brooklyn

Sandwiches are just the beginning. Starting next month, Regina’s will introduce a series of yet-to-be-unveiled collaborations with artists and designers, expand the menu, and stay open later for diners and revelers alike—essentially, Grandinetti’s own Italian social club.

“I’m a fucking guido from Brooklyn,” he says. “I want people to feel at home.”

For Esquire, Grandinetti laid out his essentials to making an authentic, New York Italian hero: the sandwich he dedicated to his late Uncle John.

“Uncle John is my pop’s big brother. He had it all, from cars to houses—he had cars he couldn’t even fit in, just to have them. The Uncle John is the most expensive bread, piled with everything we have. The roasted peppers were just an add-on to flip the traditional Italian sandwich, because he didn’t do anything 100 percent traditional. So this one’s for him.”

“Semolina is a bit sweeter and holds up well to the weight of the cold cuts. We get ours from Parisi Bakery.”

“We use a hot sopressata cause if you have stepped into Regina’s, everything can be spicy.”

“This helps to elevate the flavor profile.”

“It’s got to have pistachio or it’s not mortadella. Sliced thin, paper thin—it adds texture to the sandwich.”

“This adds the salt and melts everything together.”

“This adds the acid. Also, it helps break down the bread a bit.”

“Most people use tomato, but this is how we were raised. The roasted element gives the sandwich a good twist.”

“There’s a fine line in everything. Is it just a photo for Instagram, or a better-tasting sandwich?”

Scratch the Surface: 11 of the World’s Coolest Underground Attractions

Hôtel Lutetia to Re-Open This Spring

When you realize THIS, you’ll get over The One Who Got Away…