Quiet Time with Christ the Redeemer in Rio de Janeiro 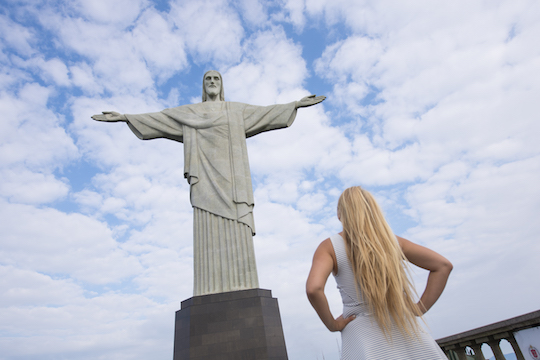 Visiting Rio de Janiero was on my bucket since before I’d even filled out my first passport application. At the very top of the list? A visit to the famous Christ the Redeemer Statue – an imposing concrete and soapstone statue that soars over 100 feet into the air and whose arm span seems to encompass all of Rio de Janiero. You may have seen its likeness in both movie clips and gracing countless postcards alike.

In reality, it’s hard to get that elusive perfect shot because of the significant crowds that the statue attracts. So when I stumbled across the Early Access to Christ the Redeemer Statue Tour, I was thrilled. This one is a Viator Exclusive so it can only be booked through Viator – and from experience, I can tell you it’ll be one of (hopefully) many highlights of your trip to Brazil.

There were several different nationalities in my Viator group but our expert and multilingual guide, spoke handily with all of us in our native tongues. Once we arrived at the midway point of Corcovado Mountain, we hopped off and got in line for tickets.

Now since we were also first in line, we were ready to pop into the official park ranger’s vehicles just as the gates opened. This, however, is one of the tradeoffs of the early morning exclusive tour – not getting to ride the scenic train up the mountain. And if you struggle with motion sickness, the van transfer and ride with the park ranger may prove to be a challenge. But in my opinion? Worth it.

We were then led to an elevator that took us up the final ascent. There’s also the option to skip the elevator and dash up the staircase which my travel companion and I took advantage of in hopes of beating the crowd. It paid off big time as the two of us got the place to ourselves and took turns snapping shots with the statue, crowd-free. Being serious shutterbugs, this was paradise.

The tour advertised thirty minutes of tranquility which is pretty accurate, although after the first five minutes, the first guests of the day began to trickle up, so if you want to capture some great photos, solo, act fast.

Once the rest of the guests began to arrive, we’d already gotten our best shots, and then turned our attention out towards the beautiful view until it was time to leave.

For those of you short on time, there’s an option to combine this early morning Christ the Redeemer VIP tour with a second stop at Sugarloaf Mountain located at the tip of Guanabara Bay in the Atlantic Ocean. We chose to save Sugarloaf for another day, though it seemed to be a popular second destination as most of our fellow tour takers were headed that way.

Although it’s not easy to get a few moments alone with arguably the most famous piece of installation art in Rio de Janeiro, with just a few simple tips – take the stairs (if you’re able) to beat the crowd and setting your vacation alarm just a little bit earlier for this special tour – you’ll end up with amazing, exclusive photos and of course, some stunning memories to go home with.

Ready for Rio but not ready for those lines? Check out our new (!) Skip the Line: Christ the Redeemer tour!

We’re Eating Everything Out of These Gorgeous,…